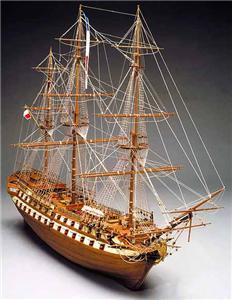 Three-masted, with two decks, 76 guns and extreme maneuverablity won Le Superbe a lot of admirers, including the English. Her architect was the famous Jacques Noel Sane. She required 700 men for the smooth running of the vessel.

The eminent shipwright Anthony Deane was directed by Charles II to build his new warships along the lines of Le Superbe, which had open galleries. They first appeared became increasingly common in English ships.

Le Superbe formed part of Admiral Villaret Joyeuseâ€™s fleet. It was a period of great battles against the British fleet.

Le Superbe came to a tragic end being sunk in a storm in 1795. It was a masterful piece of art and beautiful sculpture that sank to the bottom of the ocean.

Be the first to review “Mantua Le Superbe” Cancel reply