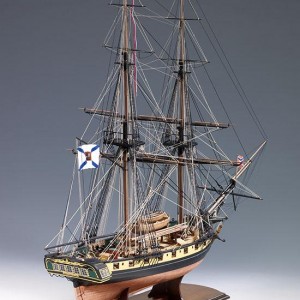 The Russian 20 gun brig Mercury was laid down in Sevastopol on January 28, 1819. She was designed as a patrol ship to guard the Northern Caucasus coast. Built of Crimean oak, with a shallow draught and equipped with oars, the Mercury was launched on 7 May 1820 and broken up on November 9, 1857.

The Mercury fought in many important naval battles during her career; the most notable being when Mercury (commanded by lieutenant A. Kazarsky) and two other ships were sailing back home from the Anatolia coast and faced a large Turkish fleet. Due to light winds Mercury was not able to escape (she was not a rapid ship), while two other Russian ships went ahead. Two Turkish SHIPS OF THE LINE engaged Mercury into an apparently hopeless battle, which, however the Russian crew decided to make a bold stand. After few hours of heavy fighting, the much smaller and massively out matched (on paper) Russian brig, maneuvering both under sail and oars, had severely damaged the rigging of Turkish ships (demasting at least one of them) and thus forced them to retreat. It is recorded that after the battle, a navigator of one the Turkish ships made a comment praising Mercury for her gallantry and strength, and the captain for his bravery;

“If in the great deeds of ancient or our times there are the feats of bravery, so this act put the others in the shade and the name of a hero should be wrote by the gold letter in the shrine of glory: the captain was Kazarsky, and the name of this brig was Mercury.”

Mercury is one of the most famous vessels of the Russian Navy, and Amati have researched this vessel as much as possible to make it as accurate and well detailed as it can be.