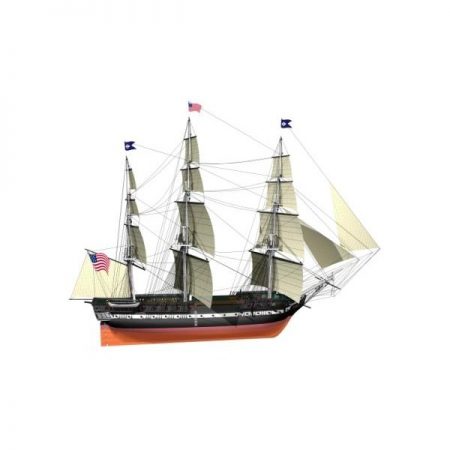 The original ship was launched in 1797 and named by George Washington after the Constitution of the United States of America. She was designed by Joshua Humpreys as one of 6 frigates for the new U.S. Navy.

Frigates were the vessel of choice as they combined hard hitting fire power with superior speed. This was proven when in the War of 1812 she captured five British Warships and, during a fierce battle with the H.M.S. Guerriere she was given her famous nickname as the British cannon balls bounced off her tough ash sides!

Later, she served with distinction as the flagship of the U.S.N. during the Barbary wars and a training vessel during the Civil War, until her decommission in 1881. In 1997 she was refitted and sailed under her own power to celebrate her 200th anniversary. She is currently a floating museum in beautiful Boston Harbor.

The BB508 is an authentic reproduction of this famous ship in the popular 1 : 100 scale. This is a plank on bulkhead model boat kit with all laser cut wooden parts and brass fittings included. It is designed for experienced builders.