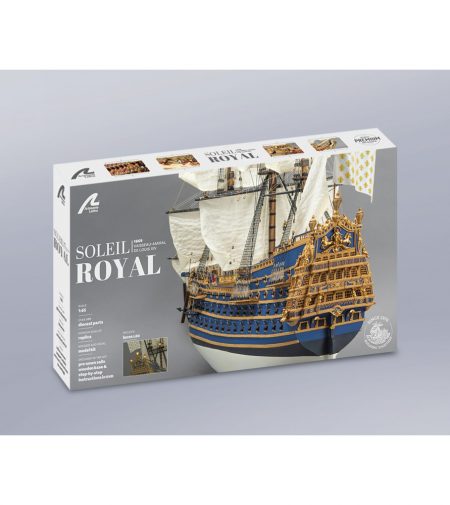 SOLEIL ROYAL 1/72 WOODEN SHIP MODEL KIT: SPECTACULAR ARTWORK
The new wooden ship model kit of the French warship Soleil Royal at 1/72 scale contains one of the scale models to build most detailed on the market. This faithful replica of the ship in line of the King of France Louis XIV has a large number of decorative details both on the stern and on the bow, as well as throughout the entire deck. Artesania Latina modelers have followed all the available and more precise information for the design and creation of this marvel of naval modeling.

Of course, the wooden model of the Soleil Royal includes hundreds of laser cut plywood and solid wood parts, as well as all die-cast and photo-etched parts, and a complete set of pre-sewn and hand-sewn sails ready to be placed. All this provides the ship, without a doubt, a spectacular beauty.

The elite modeler, to whom this dazzling scale model of the Soleil Royal is aimed, will also find Premium quality wooden pieces and… Two free bonuses included ! A wooden base with a metal name plate and a set of twelve figurines of the Soleil Royal crew to be assembled and painted, which will give this naval jewel even more realism than you have without these.

This same ship modeling lover will discover an improved and user-friendly construction experience, especially by paying attention to the guide included in the kit: detailed, step-by-step, with almost 400 pages and thousands of images. On top of that, the video tutorials will show you how to solve some of the trickier tasks. Instructions are in DVD format, no printed instructions are included.

Likewise, the 1/72 scale model ship of the Soleil Royal is prepared for the mounting of optional LED lighting – it is explained in the instructions-. LED Lightning Set for Scale Models and DIY Projects, for sale separately.

HISTORY OF THE FRENCH GUN VESSEL SOLEIL ROYAL: A MAJESTIC SHIP
The French gun vessel Soleil Royal was part of the King Louis XIV Navy. We are happy to bring you this beautiful 1/72 scale wooden and miniature warship replica that you can build with your own hands, but first dive into a brief historical background.

Soleil Royal was a French line ship with 104 guns, flagship of Admiral Tourville. In this sense, the Soleil Royal was built in Brest between 1668 and 1670 by the engineer Laurent Hubac, and launched in 1669, but unfortunately it remained unused in the port of Brest for years.

Later, the Soleil Royal was put back into service with 112 guns and 1,200 men on board when the Nine Years War broke out in 1688. Its role was fundamental as the flagship of the Escadre du Ponant (West Squad). It was said to be a fine sailing ship and its decorations were among the most beautiful and elaborate of all Baroque vessels. The emblem of the ‘Sun’ (Soleil) had been chosen by Louis XIV as his personal symbol.

Now, you can build this majestic 1/72 scale ship model with the new Soleil Royal naval modeling kit from Artesanía Latina. Pay attention to all of its contents below and you won’t be able to resist building your wooden model.