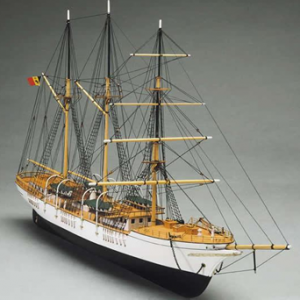 The barque Mercator lies at anchor in Ostend, Belgium. She was named after Gerardus Mercator (1512-1594), Flemish cartographer. She was designed by the Antarctic explorer Adrien de Gerlache (1866-1934) as a training ship for the Belgian merchant fleet. She was built in Scotland and launched in 1932.

Besides being a training a ship, she was also used, mainly before WW II, for scientific observations, or as ambassador for Belgium on world fairs and in sailing events. She participated in several races, winning the Oslo-Ostend race. She brought back two Moai (giant statues) from Easter Island. In 1936 she brought home from Molokai, Hawaii, the remains of Father Damien. Her last trip was to Lisbon for the commemoration of the quincentenary of the death of infante Henry the Navigator.

In 1961 she became a floating museum ship, first in Antwerp, and finally from 1964 in the marina of Ostend.
During all this time, she has become perhaps the best-known ship of Belgium.

The kit is a plank on frame hull construction, there are building plans with general details, and many fittings for this ship made of lost wax brass castings and hardwoods. There are walnut or lime planking, wooden masts and spars, brass and walnut fittings and etched brass details, rigging cord, and silk flag. All wood sections are laser cut for accuracy.

Be the first to review “Mantua Sergal Mercator” Cancel reply